A new, and hopefully long-lasting, partnership between Playson Games and the Kindred Group has begun. Playson have announced that a select number of their titles are now live with the Kindred Group, with further new releases to be added in due course.

The Kindred Group is based in Malta and has a total of 11 brands under their umbrella. As far as UK players go, the two big names that will stand out are Unibet and 32Red. Kindred offer gaming, sports betting and bingo as part of their service, and will be seen as a big deal for Playson.

The iGaming brands under the Kindred umbrella have initially added two titles from the Playson collection, with more to come in the future including new releases. The two titles available so far are Crystal Land and Crystal Crush, two-gem themed slot games that offer a different type of gaming to players, something that has allowed them to stand out from the crowd.

Crystal Land offers a large 7×7 grid for players to play on, with the aim of the game to match 3 symbols together, in the same way as playing an arcade game such as Bejewelled. Crystal Crush offers something completely different, this has cluster pays which are played on a hexagonal field and you could find yourself with up to 62 different cells on this game. 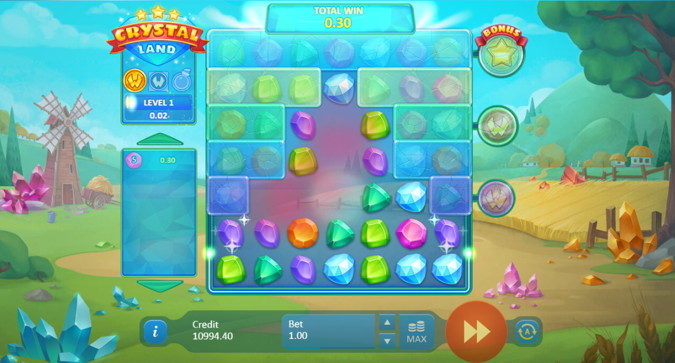 These games will certainly appeal to those who are looking for a little more from their gaming, and those who want to move away from traditional reels on their slots. Something else that this move does is it puts the Playson games in a larger shop window, with the Kindred Group being prominent in many key markets, including the UK, which is a place that Playson really want to make their mark.

Having more gaming providers in front of UK players can only be a good thing and something that creates more competition to bring us the best possible service. As far as Playson goes, they are teaming up with a group that can put their games in front of many UK players, and if they prove to be popular, expect more to be added very quickly.

NetEnt are one of the biggest slot gaming providers in the world, and the great news for UK players of their games is that it appears as though they are putting additional focus on the UK market. They have announced a new UK office has opened, which is designed to further expand their presence in the area.

The office will open in the Kings Cross part of London and comes on the back of the company’s decision to create a UK subsidiary to their company, NetEnt UK Ltd.

The company have said that they see the UK as a primary market in which they wish to grow, and these two moves add substance to that. They see their office as a better way to help and support their UK facing partners offer the best possible products to their customers.

NetEnt have already moved to add to their UK team following the announcement of this new office and they have already said that they will be looking to add more specialist people to their team in the coming months.

Although a Swedish iGaming company, NetEnt are big enough to be now seen as a worldwide brand. With the work going on in the US market at the moment, many people will be looking to get a foothold over there, but this move shows NetEnt wants to continue growing and supporting the UK markets, which can only be great news for UK players.

While the impact that this new office and the move makes may not directly be seen by UK gamers, behind the scenes this is very good news and one that reaffirms the fact that the UK is a vitally important market for gaming providers. With a NetEnt office and their staff based in the UK, our gaming providers are going to get the best possible service from them, which should mean we are at the front of the queue when it comes to new games, additions and enhancements from the NetEnt production line.