The characters of Hercules and Pegasus may be instilled in Greek Mythology as the super-strong hero (with the name Heracles) and the flying white horse, but they’re about to become much more of a reality for you. Why? Because Pragmatic Play has just released its latest slot offering in the form of Hercules and Pegasus.

With this being the case, you’ll be able to leap onto the back of Pegasus and watch Hercules in action as he takes down his enemies. With his epic might and valour, there’s little doubt that this is one hero who will impress. And with Pragmatic Play being the developer of this game, there’s even further doubt that it won’t come without high-quality graphics and entertaining gameplay throughout.

That much is clear from the moment that you load Hercules and Pegasus up, with the background depicting a scene of Ancient Greece. Potentially, it’s the peak of Mount Olympus where all of the gods dwell in Mythology, and atop this is the slot’s layout, which is made up of five reels and three rows. So, when you access the game, you’ll see that it’s quite the standard interface. This reel set is accompanied by a set of 20 different pay lines, which are set in position. Of course, this is just the start of the game’s features, because you’ll get to see Hercules and Pegasus fly into action as you continue spinning the reels.

The Game’s Setup and Betting Options 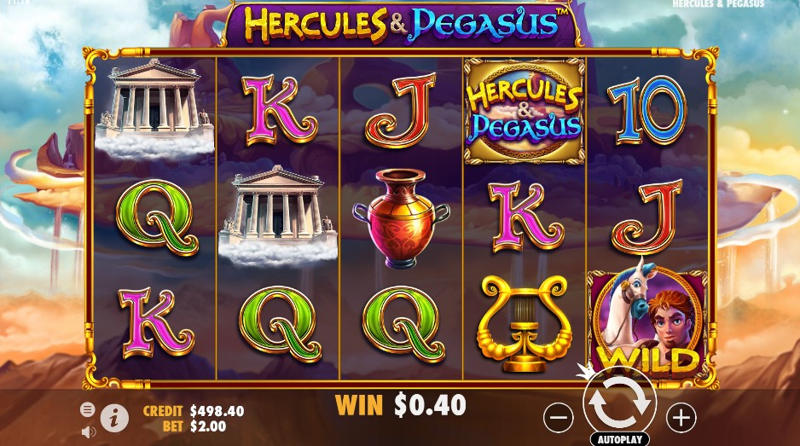 Other than the standard 5×3 interface, Hercules and Pegasus also provides you with a variety of betting options to select from. To adjust this, you can click on either the plus or minus button to either side of the Spin button, which present you with three different boxes.

These are the Coins Per Line, Coin Value and Total Bet boxes, with each one featuring its own plus and minus buttons. Up to 10 coins per line can be brought into operation, while the coin value itself can be altered between one pence and 50 pence. This means that the total overall bet that you can bring into play stands at £100 per spin.

Hercules and Pegasus also comes with an Autoplay button that you can utilise, which enables you to set the reels of spinning up to 100 consecutive times at the same wager level. You can also toggle the inbuilt sounds on and off to suit your own gaming preferences.

These run from 10 through to A, with the latter of these providing a maximum reward of £500. Joining the lower paying symbols are additions in the shape of a Greek urn, a golden harp, an ancient temple and finally, the game’s own logo. This one can pay out up to £2,000. 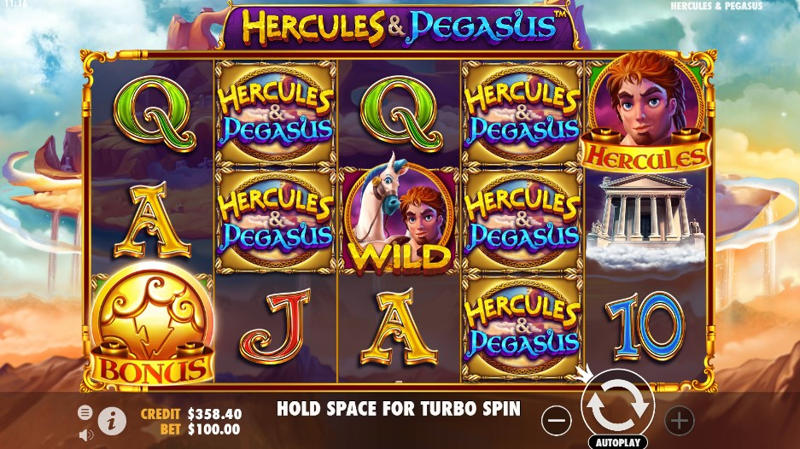 Alongside the basic features of the slot, this game comes with some great inbuilt special features for you to experience as well. For example, to begin with, Hercules and Pegasus appear in a symbol together, acting as the slot’s wild addition. This means that it can substitute for any of the other symbols already mentioned, making it of great assistance in forming wins. Wilds can appear on all of the game’s reels, and if five of them come into view anywhere, you’ll receive up to £2,500 as a reward.

Furthermore, during base gameplay, a choice between three scrolls can randomly appear on the screen on any spin. Your task is simply to select one of those scrolls to be able to trigger a random feature. These exist in the following formats:

If you’re also a fan of free spins, then this Pragmatic Play game can also cater to you. The Hercules Free Spins round is awarded to you when a shield symbol comes into view on reels one and three, with a symbol of Hercules on reel five. This provides you with an unlimited number of free spins. During the round, the vial of red potion can hit on the fifth reel. Every time this happens, additional wilds are added to the reels. The feature ends after five of the vials have appeared.

Pegasus Free Spins is an alternate feature round, which occurs when the shield is on reels one and three alongside a Pegasus symbol on reel five. Again, you’ll receive an unlimited number of free spins and if a vial with blue potion in it appears on reel five, the win multiplier for all remaining free spins increases by one. When that lands for a fifth time, the feature ends.

There’s also a Hercules and Pegasus Free Spins round, which is awarded to you when the shield is one reels one and three, as well as a Hercules symbol and a Pegasus symbol on the fifth reel at the same time. The same rules apply, with both the red vial and blue vial being in operation.