Christmas is right around the corner, and what better way to get into the festive spirit than by playing some online slot games? We’re convinced that there isn’t any better way – so, we’ve gathered a collection of some of the best Christmas slots for 2019 and brought them to you right here.

So, without further ado, here are the best Christmas slots for 2019. 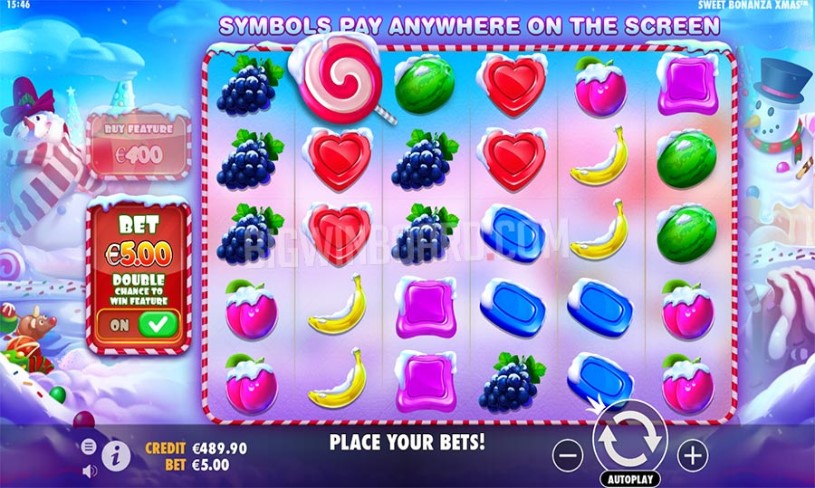 What could be better than getting your hands on plenty of sweets at Christmas and having quite the sugar rush? Not much, we’d say. Yet, Sweet Bonanza isn’t specifically a new game. In fact, it was first released by Pragmatic Play earlier on in 2019. Now it’s back for a Christmas version, featuring a wonderful winter wonderland in the background. Different fruits and sweets can be seen upon the game screen, which stands at six reels and five rows large. Wins can form anywhere on the reels in this game, as long as there are eight or more of the same one in view.

Watch out for the appearance of the swirly lollipop as well, because it is this one that works as the game’s scatter symbol. This one pays out whenever four or more are present on the reels. There’s also the Tumble feature that is in effect, so whenever you form a winning combination, the symbols within disappear and new ones can fall into view and form new wins to set the process off all over again. Sweet Bonanza Xmas also includes a free spins function, which activates whenever four of more of the scatter symbols appear anywhere. You’ll get 10 of these to play through, and there’s a golden bauble that operates as a win multiplier, too.

Get into the mood for Christmas with this wintry game from Play’n Go. Featuring a festively decorated town in the background, five reels and four rows, Xmas Magic will definitely prepare you for the arrival of Santa Claus.

With various thematic symbols upon its reels, such as holly with ribbons, a snow globe incorporating a Christmas tree and gifts, candy canes and more, it sets the scene perfectly. You can also watch out for the scatter symbol, which is represented by Santa. This one is able to trigger 10 free spins for you, while the wild symbol in the game will substitute for all other icons upon the reels. 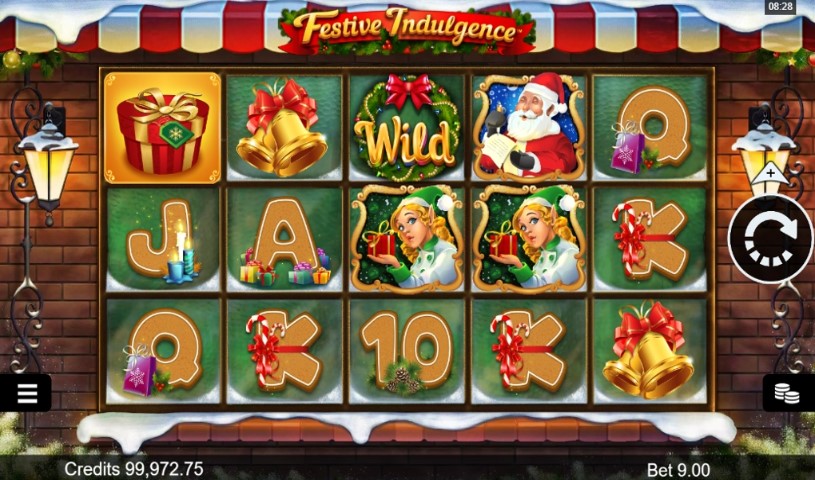 You can’t ever be unhappy to see a Microgaming slot release, and Festive Indulgence certainly brings the food side of Christmas to life on your screen. Gingerbread biscuits make up the lower paying symbols, which run from 9 through to A. There are also symbols of golden bells, a Christmas cake, the Christmas turkey, as well as Santa and one of his elves as separate symbols. These all appear on a five-reel, three-row setup, while a total of nine pay lines are also in operation.

Microgaming is also known for providing its online slots with some entertaining special features. Festive Indulgence includes a wild symbol first of all, which is present in the form of the Christmas wreath. This one can substitute for all other symbols upon the reels, helping you with forming a winning combination. There’s also a scatter symbol on the reels, which is the Christmas gift. You’ll be able to receive 15 free spins whenever three or more of them come into view, while any win formed with a wild symbol will also double your win!

Santa vs Rudolf by Netent

It’s our hope that Santa and Rudolf would get along like a house on fire, but it seems as though they’ve had some sort of falling out in this Netent Christmas slot. Santa vs Rudolf pitches the two against one another in some sort of game, but it does so in the very best way possible, thanks to Netent’s wonderful graphics, animations and inbuilt features. The game takes place on a standard five-reel, three-row interface as well, so it should all look very familiar.

With the inclusion of both Santa and Rudolf watching on from the sidelines, you’ll get to spin through symbols of Santa’s sleigh, a big bag of presents, a reindeer in a snow globe, Rudolf’s collar and much more. These are joined by symbols of candy cane-designed playing card letters, too. Both Santa and Rudolf operate as the game’s two wild symbols, appearing on reels five and one, respectively during base gameplay and all reels during free spins. You’re able to activate that free spins round by spinning a Santa Wild and Rudolf Wild into view, which then meet in the middle of the reels.

Leave it to iSoftBet to bring something slightly different to the table, which is what precisely has happened with Raging Reindeer. It seems as though Rudolph is definitely against driving Santa’s sleigh this year, so much that he’s gone to a party with some other animals. There’s an owl, a cat, a rabbit, a wolf and Rudolph himself, all appearing as symbols on the reels of the game. There’s a would symbol in play as well, which is represented by the wooden crate, and these can appear on reels two, three, four and five.

Speaking of the setup, the game has six reels and four rows, whilst also containing 4,096 different ways to win. You’re also able to trigger the game’s free spins round, which is done by spinning three or more of the game’s own logo into view anywhere. Up to 50 free spins can be won from the appearance of this one, or Jingle Spins as they’re called in Raging Reindeer. During this round, any wilds forming part of a winning combination will transform into x2 or x3 wilds and behave as two or three separate wilds on the reels that they’re on. You’re also able to trigger extra Jingle Spins while the round is active!