The pandemic has pretty much wreaked havoc on the land-based casino industry – or rather, on the land-based gambling industry in general. Casinos around the globe have had to close their doors to people in a bid to stop the spread of coronavirus, and this has obviously seen revenue take a huge hit.

While some casinos have been able to direct players to their online websites in a bid to bring in the custom during lockdown, others haven’t had the same possibilities. This did lead to some UK MPs calling for a set of restrictions to be brought into place with regard to people gambling online during lockdown, so as to stop problem gambling becoming an even bigger issue.

On the 23rd June the UK government announced leisure facilities could reopen from the 4th July, casinos, however, are currently excluded from this and so date has get been given for them to reopen.  This has created a backlash from the Betting and Gaming Council who labeled the decision as inconsistent and nonsensical, especially given bookmakers are now open and bingo halls can reopen from 4th July.

Casinos will want to reopen as soon as possible, although there are added complications around social distancing compared to many other types of business due to the nature of how people play.  Casinos can also still benefit from government protection and so some may not rush to reopen until they can guarantee it will be safe and profitable.

Currently, employees of land-based casinos are able to benefit from the United Kingdom’s Coronavirus Job Retention Scheme, which protects their employment as much as possible during the pandemic. Through this, staff have been placed on ‘furlough’, which sees the government of the country cover 80% of their salary. Furthermore, gambling businesses in the UK are set to benefit from the 100% business rates relief occurring over the next 12 months, which will significantly reduce their outgoings for that period.

Yet, the question now is what will happen once these brick-and-mortar establishments are able to re-open their doors to the public? Will the see a surge in people entering them again or will these same people have their doubts about setting foot inside? What’s more, if casinos do get to open up soon, then it’s likely that they’ll need to introduce strict cleaning and sanitising routines where both staff and guests are concerned.

Of course, there are different games within casinos, so how will people go about accessing and using slot machines as well as partaking in table games? After all, it’s common to see blackjack, poker tables and such surrounded by masses of people watching. And what’s more, these tables can have multiple players participating them at the same time.

How Will Casinos Reopen and What Will It Look Like? 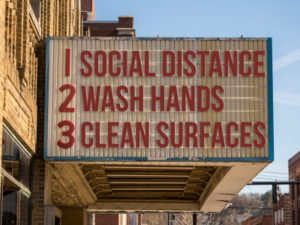 If the UK follows in the footsteps of what the United States has planned for its land-based casinos, then it’s likely that visitors will have their temperature taken at the door before being allowed to enter, every other table could be closed so as to abide with social distancing, only a half or a third of slot machines will be left operational and, potentially, plexiglass screens could be installed between dealers and players.

Furthermore, dealers and customers within casinos could be required to wear masks at all times, with gloves also being provided to dealers. Additional jobs could be created for workers to sanitise slot machines, kiosks, elevator buttons, decks of cards and more as soon as they are finished with. It’s even the thought process of one Las Vegas casino to hand out plastic sticks, which will be used for pressing buttons within the establishment. While these are safety measures that are being considered within the US, the potential for them to occur within UK casinos is also fairly high.

Table games are a different ball game to the norm, so it could be that guests are forced to stay well clear of tables while players are seated more than two metres apart while participating in such.  It is likely casinos will use video consoles to broadcast the live table games allowing people to bet on a real game but while sitting far enough apart.

Further to this, there’s the possibility that casinos will restrict the number of people being allowed into the venues to begin with. It may be a case of when one person leaves, another can enter, just as an example.

If people are required to wear masks within land-based casinos though, it does put a risk of those who have been banned from such not being recognised while wearing such. The same question is raised for those who have self-excluded. How will it be possible to sanitise poker chips that are used for table games or even the money that people bring into the casino with them? Rules surrounding cleanliness and hygiene are only effective enough if everyone follows those rules, too.

The other question that remains is whether or not people will actually want to enter land-based entertainment venues straight away. Lockdown is being lifted, but that doesn’t mean people will be clambering to get to them. There’s likely to be a lot of wariness between people in social circumstances, and casinos do present that sort of situation.

If you were to look at it from the other end of the spectrum though, people have been in quarantine and lockdown for a considerable amount of time already. There’s likely to be some citizens who are desperate to reach some semblance of normality again. Not everyone is a fan of online casino gambling when compared with land-based establishments, which means that if casinos do re-open their doors, there’s likely to be some people ready to enter them again.

The best route to take is for these people and the venues they visit to undertake necessary precautions – especially in the beginning. Everything will need to restart, with many things having to go from ground zero essentially. It’s about starting slowly and steadily building back up to how they were previously. Slowly but surely, people will find themselves settling in to social situations once more, and this is likely to become much more widespread once a vaccine is found for COVID-19.

Most UK land-based casinos rely on local people as their main customer base, with the exception of a few in central London.  However, mega gaming cities like Las Vegas and Macau rely mainly on tourists to pack out their casinos and with international travel likely to be a fraction of what it should be in 2020 it is likely these holiday casinos will struggle more than others.

When we say struggle though we have to be relative, it simply means that these massive casinos may make less money rather than go bust.  There could however be longer lasting effects caused by people traveling less in general that could result in a suffocation of the international casino industry for years to come.