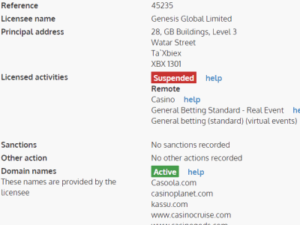 Genesis Global Limited had their UK gambling license suspended out of the blue on the 20th July 2020.  The UKGC has not yet detailed the exact reasons for the license suspension although it is rare for the commission to suspend licenses without warning and this suggests whatever the issue is it is serious enough to require the company and brands cease activities immediately.

This means from 20th July until further notice customers will no longer be able to bet with Genesis brands, although they can still withdraw any funds they have in their accounts.

The suspension applies to the following sites:

Why Has The License Been Suspended? 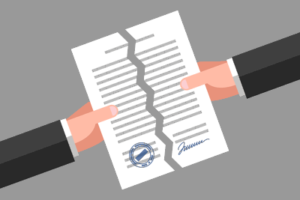 At this stage details are light from the Gambling Commission. They haven’t told us what they have failed to do but it does suggest that whatever it is was serious enough for the regulator to immediately suspend gambling services, not an action they would have taken lightly.

From previous rulings by the UKGC this often means there will either be failures in protecting problem gamblers or the vulnerable or fraud and criminal activity.  Possibly both.

The commission have stated:

Section 116(2) of the 2005 Gambling Act is shown here with the relevant rules highlighted in bold:

(a) has reason to suspect that activities may have been carried on in purported reliance on the licence but not in accordance with a condition of the licence,

(b) believes that the licensee, or a person who exercises a function in connection with or is interested in the licensed activities, has acquired a conviction of a kind mentioned in section 71(1), or

(i) suspects that the licensee may be unsuitable to carry on the licensed activities, or

(ii) thinks that a review would be appropriate.”

Suspension now makes it illegal for Genesis Global to offer any gambling services in the UK until the license is reinstated.  This is something the company have advised us that they are doing as quickly as possible although as yet they have not even been told the exact details of what they have been suspended for.

Genesis released a statement on the 23rd July to say they are disappointed with the ruling and are robustly appealing the UKGC decision and have faith in their own compliance and responsible gambling procedures.  They claim the decision is ‘disproportionate’ and they have taken legal advice on the sanctions.  The group state that they had several UKGC assessments that revealed no adverse findings.

The UKGC did recently launch a series of emergency measures in relation to a problem gambling increase during corona virus, it is possible the company failed in regard to some of these measures.  The use of credit cards for gambling were also banned in April and it is also possible the suspension could relate to failings in this area.

Who Are Genesis Global Limited? 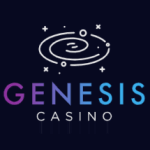 Many casino sites are part of larger groups, this effectively allows sites to be set up more easily and cheaper than running independent sites (e.g. they can negotiate better games software deals, etc).  Genesis Global are the license holder for all their brands, which means they are the company responsible for keeping customers and funds safe.

Genesis Global are fairly new to the industry only setting up in 2014 but they have gained a good following of players to their 12 sites.  Casino Cruise is the longest running and best well known of the Genesis brands.  Other brands affected include the flagship brand Genesis Casino and their best performing slots site, Sloty.

In the last year Genesis have also launched several new sites including; Kassu, Casino Planet, Casoola, Casino Gods and Spin It.  It is possible that by growing so rapidly in the market they may have neglected to keep their compliance levels to a high enough standard.

Will They Get Their License Back? 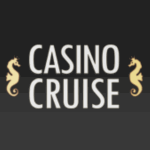 It is too early to say as we do not yet know exactly why the license had been suspended but from the communications we have received from Genesis they seem keen to get their sites back to business asap and so are likely to address the issues rather than simply pull out of the UK market.

The sudden closure of 12 brands to the UK will have a severe financial impact on the company and the longer a suspension goes on the more difficult it could be for them.  This, however, does not stop Genesis from continuing to operate in other countries during this time. They also possess gambling licenses in Malta and Sweden.

Once we have more details about the suspension we will update this page.