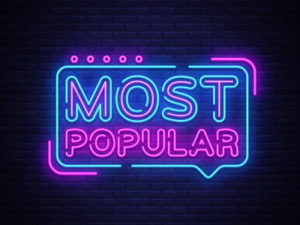 Online casino slots are some of the most appealing games around, they are designed to be after all, and these have grown in popularity over their years of existence.  In the modern world people will even spend hours watching other people play slots online.

This means that today, there is a huge number of online slots available to access and these come from a number of exciting developers. Slot games have a variety of themes acting as their basis, as well as multiple different inbuilt special features. At the same time, they feature different setups, including five reels, six reels, Megaways to win and masses of others.

Understandably, many slots have risen to a higher level of prominence than others. However, we want to know about the ultimate slot game where popularity is concerned. Which slot currently stands as the online world’s most popular and how did it reach such lofty heights? Plus, which developer is responsible for such an entertaining and intriguing slot game, and how many people have played it so far? We will be uncovering the title of the slot and discussing what exactly has pushed it to this prime position. 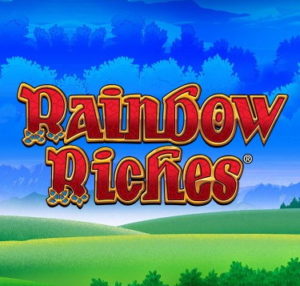 It would be a little bit criminal to simply focus on the very highest ranked most popular game in the world without first paying a little bit of attention to those just behind it. The top three games in terms of popularity and casino lobbies that they are present in come from Play’n Go, Barcrest and Netent. These are three big players in the casino gaming industry, not least for their slot game releases.

It should come as little wonder to find that the Book of Dead online slot game from Play’n Go is ranked so highly. The slot has been the centre of many online casino promotions, where free spins have been acquired by players to spin the reels and go on an adventure to locate the titular book. Between 2018 and 2019 it has enjoyed varying levels of top-tier success with players, going up from sixth most popular in the world to second most popular throughout various time frames.

Joining that game as one of the most loved in the world is the Rainbow Riches slot machine from Barcrest. Having been around since 2009, this slot has managed to pick up traction over the proceeding years, and this has likely come around due to the fact that it contains some intriguing special features for you to experience during gameplay. It has an RTP rate of 95% and you can win a maximum of 250,000 coins when playing it. Just a couple of years ago though, it wasn’t much higher than 30th in the world rankings, before receiving an influx of players in late 2019 to boost it upwards. That is a top-tier position that Rainbow Riches has managed to maintain since that time.

Did anybody doubt that Netent would find itself at the top of the rankings for releasing a slot with the highest level of popularity in the world? The company has been around since the 90s and is still releasing online slots today. Its most recent venture is the Gordon Ramsay Hell’s Kitchen online slot, which is certain to turn some heads and garner a lot of gameplay from players.

However, it is the 2013 release entitled Starburst that has risen to prominence in the industry. It is this game that has held a very high-ranking number one position with little faltering for a number of years. While others may have risen and fallen again, none of them have managed to dislodge Starburst from its throne, and when you play the game, this is not difficult to understand. It is one of the very best that Netent has released, despite it not being something that is completely all-singing and all-dancing.

In the United Kingdom alone, 600 of the 723 casinos that are accessible to players were noted to have Starburst as an available game within their lobbies. And of that figure, 494 readily displayed the game on the homepage of their lobby. Clearly, these sites know of its popularity and are outrightly providing quick access to it for players.

Nothing Comes Close To Starburst

Accessing this slot back in 2013 provided something new and novel. A video slot like it had never really been introduced before, and it not only showed the innovative skills of Netent, but the high-quality graphics that the developer was capable of, too. Those skills and graphics have continued to improve in the proceeding years, but Starburst has remained a compelling and popular title for many gamers.

Choosing to play the game will provide you with a standard five-reel, three-row layout, so nothing particularly stands out as being untoward or different there. What does hit from the very get-go though is the impactful piece of music playing in the background. The game itself takes you into space, and it is such a fitting soundtrack that plays, presenting you with images of interstellar travel, passing by planets and moons on your journey. And if you can be captivated by an online slot game due to its background music, then there must be something exceptional to enjoy when you start spinning its reels.

Never one to really disappoint, Netent ensured that the Starburst slot had a lot more than its soundtrack to keep players interested. First of all, its stellar graphics stand out throughout the game. With a sunlit planet in the bottom-left corner and various floating stars being depicted as well, Starburst sets its scene perfectly. The symbols that appear on its five reels are nothing specifically stand-out when you view what they are. Gemstones take up a lot of room on the reels, and these have been seen in multiple other slots. Of course, the Netent graphics do make them pop a lot more in Starburst. There is also the inclusion of a number 7 and a BAR symbol.

Perhaps gamers may not be so enamoured with it only featuring 10 paylines as well. However, when the game was launched back in 2013, Starburst brought something quite new to the table. You see, the 10 paylines pay both ways. Not only can players form wins from left to right, but from right to left as well. This pretty much doubled the number of lines in action, and it was this that was one of the primary draws for gamers.

Yet, it was the Starburst Wilds feature that drew people in even more, and it remains the case to this day. Multi-coloured stars operate as wild symbols in the game, and it is these that are pretty much its sole special feature. These can show up on the game’s central three reels only, but when they do, they will expand over the entirety of the reel. Then, a re-spin is also triggered, and if additional wilds appear on other reels, the process repeats itself. This can result in some huge wins if you manage to spin three central columns full of star wilds.

Why Did Starburst Become Such a Hit? 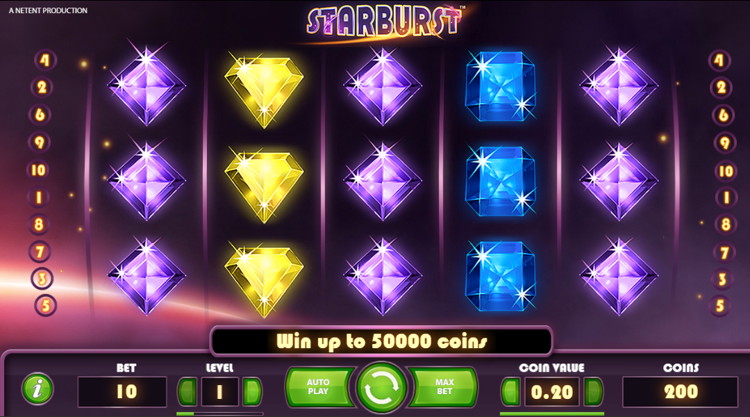 There is little doubt that the fact that Starburst has been created by the Netent brand has helped it to garner such a position in the world. It is one of the best brands currently operating in the gaming sector, with impressive slot games being released on a regular basis. But what is it about Starburst that really made players look up and take notice to propel it to such a popular standing?

Well, the graphical capabilities of the game is one of the reasons. As noted earlier on, Netent has never faltered with regard to the imagery running through its slot releases. When you load Starburst up, this much is clear from the very start. The graphics are crisp and clear, while bright colours shine through to provide a luminous design. And it is these graphics that also bring the overall theme of space to life on your screen. It is a perfectly designed slot in this instance.

While many developers have been trying to wow and impress players with masses of special features and multiple functions within slots, Starburst is not like that. It is, in fact, the simplicity of how it works and the ease by which people can play it, that has contributed to its success. Netent proves with it that you do not need to have something exploding here and symbols crashing down there to create an intriguing game. Players often want something that is both simple to play but still visually entertaining. Starburst gave them such a game when it was released, and it has maintained that status throughout the proceeding years.

One other thing to note about the game is that it works perfectly for both budget players and for those high rollers, too. There isn’t a huge number of slots available that can really say they cater to both of these demographics. However, with bets ranging from as little as 10p and right the way up to £100 per spin, Starburst can. And as with the other points made, it is likely that this has contributed to its long-lived success with gamers.

Starburst is also a low volatility game, meaning that you will experience payouts on a frequent basis. Granted, these may be lower in value than some other slot games, but considering we all like to win, the fact that it forms combinations so frequently provides a compelling reason to play it. The game also has a good RTP rate of around 96.09%, which works nicely in tandem with the volatility level.

With these points all being contributing factors, it is not difficult to understand why Starburst has become the most popular online slot in the world ever. Netent clearly knew what the phrase “less is more” meant when creating it, and slot gamers have really eaten it up in their thousands.

And while many developers have tried to replicate the success of Starburst, they have all failed in that department. Why? Because with something as good as Starburst already being on the market, why would someone go for a carbon copy of an already-fantastic original? After all, not many people watch the remake of the movie Psycho, because the original by Alfred Hitchcock is so good and did not need tampering with in any way. The same theory can be put towards slot games – a point that Starburst is able to very much prove.