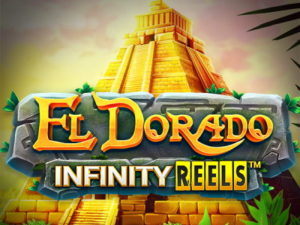 Anyone who is aware of online slot game innovations will know all about unique features like Megaways. That was created by the Big Time Gaming (BTG) brand, and since it rose to popularity with players, the mechanic has been licensed out to numerous other game providers. Following on from that innovation though, several other brands have been looking to make their mark on the scene. This has led to the creation of one or two new and exciting functions in games, with a couple of them gaining increased popularity.

These exist as the Infinity Reel and InfiniReel slots. What exactly are these, and what is it about them that has helped to increase their popularity with players? Well, the concept behind them is quite simple, and it’s curious as to why developers never thought of it years before. For a clue as to how they operate, you only need to take a look at their name.

What Are Infinity Reel and InfiniReel Slot Games? 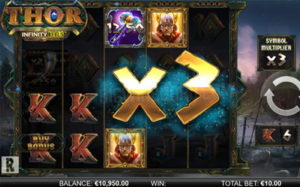 Due to the fact that slot game technology has advanced so much over the years, developers have been able to step outside of the previously in-place boundaries. Through this, they have been able to stretch their imaginations and adapt slot releases so as to fit in with those thoughts and creative drives. And it is thanks to the more recent lack of boundaries that the Infinity Reels mechanic was created and introduced through several games.

The idea behind this function is that you start out a slot game with a set number of reels, which frequently stands at three. Spinning the reels plays out in exactly the same way as it does in a standard slot. Yet, if you acquire a winning spin, then you will see another reel added to the layout. Should the spin after that result in no winning combinations being formed, the game resets itself to the base number of active reels. However, if another win is formed, then the number of reels increases once again.

The beauty of these games is that there is no maximum number of reels that can come into play per spin. The reels just continue adding on to the end of the layout, so as long as wins continue forming, the reels continue increasing in number. Each of the different slots containing this mechanic then also comes with its own additional quirks and bonus perks to keep you entertained throughout gameplay. Because of this, you could end up playing an Infinity Reels game where you are guaranteed to receive wins after a certain number of spins played, or something similar.

Who Makes These Games?

Netent has licensed its InfiniReels out to various other developers as well, in a similar way to Big Time Gaming licensing out its Megaways function. It did this back in 2018, allowing Gauselmann, Merkur and Blueprint Gaming to take advantage of its Megaways mechanic.

Reel Play is owned by the Relax Gaming brand, which is much better-known than its subsidiary, founded by Patrik Österåker and Jani Tekoniemi in 2010.

Netent, on the other hand, is one of the world’s best-known and loved online software developers. Many of its slot games have become worldwide number one hits with players, including titles like Starburst and Gonzo’s Quest. The company created its InfiniReels in order to provide the gaming market with highly volatile games, promising wilds, re-spins, multi-slams, free spins and more within those games.

Netent licensed its InfiniReels out to other companies like Red Tiger Gaming (which is also a company that it acquired in 2019), and this allowed the slot game Dragon’s Fire to be taken to another level entirely. And this isn’t the first time that those two brands have co-operated with one another either, uniting for games such as Gonzo’s Quest Megaways and Piggy Riches Megaways. Together, they have crafted entertaining online slots, and with the inclusion of InfiniReels, there is definitely more to come.

It wouldn’t be very friendly of us to make mention of these enticing slot games without providing a bit of information on how they operate. Therefore, let’s take a look at how they play out and how you can benefit from spinning the reels of such a game. Let’s make use of the game mentioned earlier – Dragon’s Fire InfiniReels.

This slot begins with a three-by-three grid for its interface, and on there you will see the normal slot symbols that can be expected from a game. You proceed with selecting your preferred bet, as normal. From there, you need to click on the standard spin button, which will spin the three reels in view. Once the reels come to a halt, you see that you have formed a winning combination across the layout. In this instance, an extra reel is added to the end of the layout, meaning that it now stands at four reels by three rows large.

You hit the spin button again, and at this point you want to see the same symbol that created the initial win landing in as many positions on the reels as possible. This will result in extra wins being formed. And more wins being formed will continue adding reels on to the end of the layout. Because the game is an InfiniReels release, the number of reels being added can continue for an unlimited number.

It is also due to this that InfiniReels games do not have specific paylines included in them. Instead, wins are formed without the necessity of these. Should things go well for you, then you’ll find yourself in a situation where more reels than can typically fit onto the screen are present. From this, you will usually see what is known as a mini map showing up at the bottom of the screen. This displays how many reels are currently in operation per spin, with winning symbols flashing up on them there, too.

Upon completing a set of winning spins and reaching one that doesn’t result in a win forming, the number of reels will return to the base number of three-by-three. The process then starts from the beginning once again, allowing you start forming wins and increasing the number of active reels.

It’s also the case that, depending upon the game you’re playing with such a mechanic included in it, you may also trigger one or more special features. Potentially, you will spin three scatter symbols into view on the reels and this will trigger a free spins round with guaranteed wins on each spin, for example. Different Infinity Reels and InfiniReel slots come with different inclusive features for you to experience. It’s entirely up to you which of them you play, and the hope will always be there that you trigger a special feature to combine perfectly with the Infinity Reels.

Now that you’re a little more familiar with how the mechanic works, it would be ideal to know about some of the games that feature these perks. This is why we have put together a collection of some of the best Infinity Reel and InfiniReel slot games. The majority of these games will operate in much the same way, but they will come with different themes running through them to appeal to you. 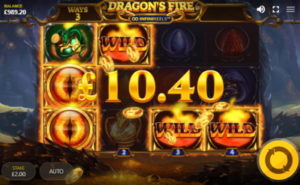 We have spoken about this game somewhat earlier, so it seems unfair not to mention it as a recommended InfiniReels slot. This collaboration between Netent and Red Tiger Gaming is set in a world of dragons, as its title suggests. Therefore, it really does bring the fantasy theme to life, as best these two developers know how. In this respect, you can expect wonderfully high-quality graphics and animations throughout it.

Dragon’s Fire: InfiniReels begins with three reels for you to spin, and it occurs inside a dragon’s lair. It begins with a total of 27 ways for you to form wins, and then this number increases with every new reel that is added to the setup.

Within the slot, you may get to experience the effects of the scatter symbol. Should this one reveal a multiplier, then this applies to all wins formed and triggers the Fire Egg feature. Only a single egg can appear on each spin, but new egg symbols will add to the original multiplier amount, should one already be active. Three Dragon Spins scatters landing anywhere on the reels will also trigger eight free spins for you to play through, benefitting you even more. 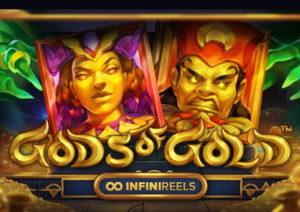 Again, this online slot starts with three reels for you to spin, with the theme behind it surrounding an ancient, unearthed tomb in the lands of Mesopotamia. You can trigger 10 free spins during gameplay if you bring three or more scatter symbols into view anywhere, too.

The additional reels that are added to the game when you form wins will all be displayed on its mini map for you to keep track of as you continue spinning. As well as having a scatter symbol and free spins, the reels contain their own wild symbol, appearing on the fourth reel and onwards. Re-spins can also be triggered completely at random, while a multi-slam function is also present. This will randomly add two or three reels to the setup after a win is formed.

Of course, with this slot being a Netent release, it was only natural that it was going to contain exceptional graphics and its theme being executed perfectly. It also comes with an included RTP rate of 96.21%, and with that being the case, who could argue with playing it? 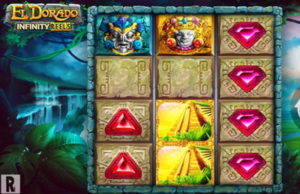 Reel Play is responsible for the creation of this El Dorado: Infinity Reels slot, and it is powered by Game Server. Of course, as its title suggests, it all takes place in the lost land of El Dorado, and the developer has executed this theme in an ideal way, too. You definitely feel like you’ve got lost within this South American land, thanks to the imagery produced in it by Reel Play.

El Dorado: Infinity Reels works in the same way as the others – by adding an extra reel for you to experience if you form a winning combination. However, it also has some differences as well. You have the chance to store your free spins triggers up in order to activate a higher level. Whenever you hit 12 or more new reels in a single spin, then you’ll end up triggering a jackpot payout as well, and this can be quite the huge win to benefit from!

As well as being able to store up your free spins in this game, you can access a gamble round and try to trigger a higher level of winning overall. You will also be able to experience a symbol multiplier increase every time a new reel is added to the layout. If you land any of the temple symbols, then a free spins will activate for you, with wild symbols also coming in handy for forming wins. 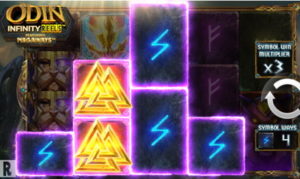 Talk about a combination of excellent mechanics, this game includes both the Infinity Reels and the Megaways functions for you to experience during gameplay. Through the latter of these, you can experience up to 117,649 ways to win per spin. With the addition of multiple reels in play, this can create quite the explosive outcome.

Naturally, the god Odin is the theme behind this Reel Play release. And thanks to the fantastic graphics from the developer, this really does stand out when you play it. You’ll also have the potential to benefit from the inclusive free spins speciality, with sticky multipliers also being active throughout the round.

If you also manage to bring 12 or more reels into play during this game, then you get to benefit from an amazing 888x your stake as a result. If you want to really benefit from the Megaways and the Infinity Reels in one game, this is the slot that you should be looking for at an online casino.