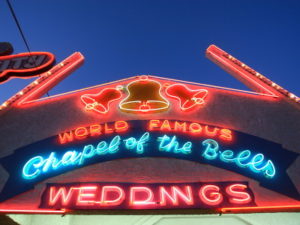 A wedding is one of those events that has become an even bigger event for many people these days. Gone are the times of simply getting married in a church or a registry office and then dancing the night away at a reception hall. Instead, many people tend to enter into a state of marriage in much more novel ways. Some people choose to get married in the centre of a woodland, giving a sort of fairytale/fantasy wedding, others opt for something a bit more bizarre and extreme, such as choosing to get married while underwater. The world really is your oyster when it comes to marriage venues, themes and so on today.

We all know you can get married in a chapel in Las Vegas but now in the UK, due to relaxation of laws recently, it is possible to get married pretty much anywhere.  That includes a land based casino if they have applied to be an approved venue.  Marriages still have to adhere to certain rules but ultimately the type of venue is now less important than in the past.

A Civil Marriage in Approved Premises 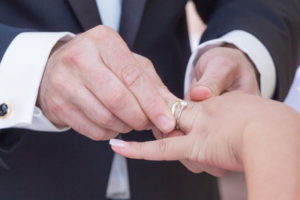 The current laws in place within the United Kingdom allow two people to get married in one of two different ways – either in a religious ceremony or a civil ceremony. The former dictates that the marriage is taking place in the eyes of God, and in which cases, this takes place within a religious location such as a church, chapel, temple etc. The civil marriage option dictates that you are marrying in the eyes of the law, and therefore, you are a lot freer with the venue that you decide to get married in.

Both opposite sex and same sex marriages can be conducted in a civil ceremony. And British law states that the venue that you choose will need to be approved for such an event. In order to ensure that this is the case, an application for such approval needs to be submitted to the government. This law relates to both England and Wales, and the grant of approval will be supplied to the venue on certain conditions. Those conditions include the fact that you should identify a specific room or rooms where the wedding or civil partnership will take place. Outside space can also be approved, as long as you identify rooms inside and the outside space is within the grounds of the building, too.

The council ruling over the area that the venue is located in must also be happy that the premises for the wedding are both seemly and dignified. They must also be regularly available for marriages or civil partnerships to take place inside.

Further conditions dictates that you must:

It is also necessary to ensure that the proceedings take place solely in the specified place, there is no religious content associated with the wedding and that the proceedings are freely open to the public. Certain locales may also state additional requirements prior to approving the venue.

With those being the official rules surrounding civil marriage ceremonies, a casino could very well be named and approved as a venue for such to take place in. Such establishments tend to have a variety of separate rooms that do not hold gaming machines or tables inside them, there is likely the potential for a wedding ceremony to be held within one of those areas.

It is worth noting that if even if a casino is an approved venue it is still an establishment for adults only and so your guests may be restricted to over 18’s.

Bring the Casino to You 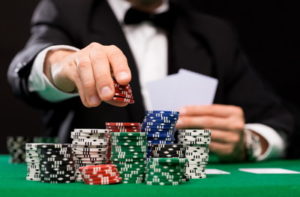 While not strictly being a wedding that takes place in a casino, there is also the possibility of bringing the casino games to your venue of choice. Casino game hire is something that various events, not solely weddings, take advantage of. Multiple companies specialise in providing fun casino hire for weddings, although this is a slightly different scenario.

It determines that casino games can be played by wedding guests, with options like roulette, blackjack and so on being readily available. However, they are not played with actual money. It is simply a fun setup, with guests being given a number of what are determined as “fun dollars”. These will then be exchanged for chips at the rented tables. Players go ahead and experience fun versions of poker, blackjack and so on this way.

Of course, with this kind of setup, a couple could tie the knot in the middle of a farmhouse and have the casino tables standing by in close vicinity for guests to enjoy. The wedding itself isn’t necessarily taking place within a casino, and if it was, hiring casino games for it would seem fairly pointless.

Getting Married in a Casino in Scotland 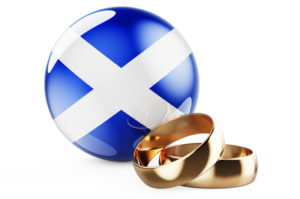 While Scotland remains a part of the United Kingdom, the rules laid out above only apply to England and Wales. What about if you are in Scotland and you want to have a civil ceremony in a casino? Well, in much the same way you must choose a place where you would like the wedding to take place. This must be agreed upon with the registration authority, which you will need to contact in order to have the marriage registered as well.

Only registrars can guide you through the whole marriage process, and this includes choosing a venue to get married in. Therefore, in theory, it is also possible to get married in a casino establishment if you reside in Scotland.

However, it is likely that this kind of marriage isn’t quite as popular in the United Kingdom as it is elsewhere. We’re thinking Las Vegas or Atlantic City, as it happens. What are the rules if you get married abroad as a UK citizen? Or, even if you aren’t, do casino weddings take place that frequently overseas?

A Las Vegas Wedding for the Ages

It is common knowledge that casinos are highly welcoming establishments, and they deal in high levels of hospitality regardless of their location. Generally speaking though, you may turn your attention to the city of Las Vegas, Nevada as being an ideal location to get married in. As it happens, many people do, primarily due to the simplicity of being able to hold a wedding there. Often, there is no waiting period to go through, so essentially, you could decide on a whim to get married on that same day. While it is recommended to pre-register for their marriage licence, a couple could easily visit a chapel in Vegas and have the ceremony conducted afterwards.

But what about getting married in a casino or other alternative establishment? Well, with the aforementioned marriage licence in hand, “you can legally marry anywhere with a licensed officiant”, says Reverend Arnold Garcia. He has been a wedding officiant for the past decade, and he also owns the Love Story Wedding Chapel in Vegas.

It simply takes a valid form of identification from each person entering into the marriage and an application to be submitted at the Clark County Marriage License Bureau. You can then proceed to get married straight away after you obtain your license, and this remains valid for a one-year period, too.

Obviously, it is ideal for you to make reservations at your preferred wedding venue, especially if you’re having multiple guests in attendance. However, it is also the case that many Vegas venues will accommodate you without a booking being made, according to Kirsten Bulock, who is a long-time wedding officiant in Vegas.

While Las Vegas is home to venues like Café Lola, Chapel in the Clouds and the Graceland Wedding Chapel, there is nothing stopping you from marrying in a Vegas casino, either.

In fact, the Bellagio Resort and Casino is known as one of the most popular locations for couples to tie the knot in. With expansive views of the Lago di Como and the fantastic Fountains of Bellagio music and light show, it actually serves as an amazing marriage location. Mandalay Bay Resort and Casino is another place that readily welcomes couples to say their vows, with the Seascape Ballroom inside the Shark Reef Aquarium there proving to be a popular option. The Venetian also offers wedding ceremonies inside, offering a little slice of Italy as part of the service.

Naturally, these Las Vegas casino establishments are much larger than the buildings in the United Kingdom, often incorporating hotels, restaurants, ballrooms and so on inside. So, they are much more elaborate and serve as wedding venues in a much better way.

Aussie Wedding in Vegas Thanks to Online Casino 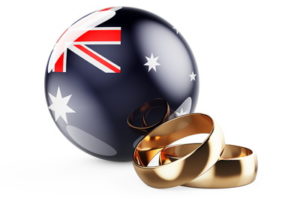 It’s not usually the case that an online casino operator will get involved in a couple’s wedding plans. However, it seems as though Party Casino had no interest in staying out of one couple’s marriage ceremony.

The casino organised what was deemed as an invitation-only event in Vegas, bringing in guests from multiple countries around the world, including Greece, Canada and even Australia. This package holiday was provided to various VIP players at the site, offering up trips to the Grand Canyon, ticket to a J-Lo concert and a helicopter tour of Las Vegas.

One of the attendees of this event was Damien, a VIP player at Party Casino, who had flown all the way from Australia and brought his fiancé Lynn along with him. He had always dreamed of flying to Vegas and marrying Lynn – something which he had spoken to his account manager about several times. Party Casino wanted to help make sure that that all happened, laying out complimentary spa treatments for the pair and wishing them happiness with a card. This led to Damien and Lynn inviting Party Casino to their Vegas wedding too, which was due to take place a chapel in the city.

That ceremony took place and even had a cheesy Elvis impersonator on hand to serenade the couple as they said their vows. That ceremony was even streamed internationally, so that the pair’s friends and family back home could view it. Damien even declared one of the Party Casino representatives as his best man for the big day. 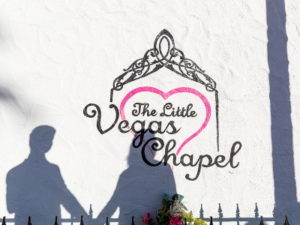 It’s not only the common person who has opted to get married in Las Vegas. High-profile celebrities have chosen the casino city as their favoured wedding locale. Game of Thrones actress Sophie Turner got hitched to her singer-guitarist partner Joe Jonas at the Chapel L’Amour, exchanging their vows in front of an Elvis impersonator. However, this was just a prelude to a much more elegant marriage ceremony, which was held in France two month later.

Lily Allen also got married to actor David Harbour in Las Vegas in September 2020 – another one which was officiated by an Elvis impersonator in the Graceland Chapel. Nicolas Cage also tied the knot with his makeup artist girlfriend Erika Koike in Vegas on the same day that they applied for a licence. That unison only lasted for four days though, as Cage said that when it happened, they were both drunk out of their minds.

And who can forget the 55-hour-long marriage of Britney Spears to her childhood friend Jason Alexander? The pair had a quickie Las Vegas wedding in January 2004 after partying together in the Ghostbar located at Palms Casino Hotel. Visiting the Little White Wedding Chapel afterwards, they exchanged their vows at 5:30 in the morning with no friends or family in attendance. Spears claimed that the whole thing was just a joke when she annulled things just a couple of days later.