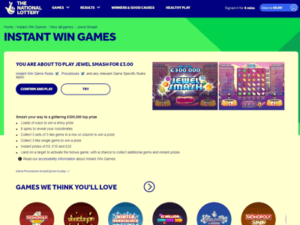 Carolyn Harris, the Labour MP and chair of the all-party group campaigning for action on gambling-related harm, has spoken out against online instant win games. In a recent statement, Harris urged Britain’s lottery operator, Camelot, to stop using its National Lottery branding and logo on the instant win games, as she said they could lead to gambling addiction as a result.

She went on to state that the online games which are now being provided by Camelot are too similar to harmful betting products that are also promoted by the country’s gambling industry. Furthermore, Harris and her group of MPs examining gambling harm said that these online instant win games contribute a significantly smaller portion of their revenues to good causes when compared with the National Lottery itself.

Speaking on the games, the Labour MP said that the current lottery operation is “unrecognisable” from the days when it first launched back in 1994. “It is not acceptable that they are using what people trust as a brand for good causes to encourage people to gamble. It’s appalling”, she continued.

How does Harris want to adjust the way that these games are promoted to players? Well, she requested a ban on the National Lottery trademarks being utilised on them. The games, which include titles like Jewel Smash and Cash Tripler, offer players the possibility of winning up to £1 million. Yet those campaigners who have been trying to integrate more curbs on the UK gambling industry have said that they are a lot more likely to be linked to problem gambling.

People across the United Kingdom are well aware of the branding and logo of The National Lottery. Wherever the crossed fingers image is seen, the lottery is likely to be operating. While the brand itself, including that specific logo, is licensed out to operator Camelot, it is actually the UK Gambling Commission that owns the trademark on them.

Yet the licence currently held by Camelot to provide the country’s lottery games is due to come to an end in 2024. And campaigners have been actively seeking a change in which company is given the new 10-year licence to continue providing such across the UK.

The Gambling Commission has been in the process of holding a competition of sorts to determine which operator will be placed in charge of the lottery. Yet that process has been delayed twice over already, resulting in many people questioning just how effective the regulatory body is at its own job. It is that delay which means the new licence will begin on February 1, 2024, and various bidders have been trying to get their hands on it.

As well as Camelot putting its own bid in to reclaim the licence for the proceeding 10-year period, the media tycoon Richard Desmond has been pushing his Northern & Shell brand forward for it. At the same time, the Czech-owned brand Sazka Group has inserted its own bid, while Sisal of Italy is another one looking to muscle in on the UK lottery. Camelot may have won all three licence competitions that have taken place since the 1994 inception of the lottery in the United Kingdom, but today it is at a greater risk of losing out.

Sisal is currently in the process of being acquired by the massive Flutter brand after a huge $2.2 billion (£1.6 billion) takeover. Meanwhile, Richard Desmond is the current owner of the UK Health Lottery.

The complex bids coming from the four companies mentioned will see the Commission having to eke out the competition until it is whittled down to one – and the hope is that this will be the right one to do the job effectively enough. Whether or not it will satisfy the campaigners seeking out extra help for gambling harm remains to be seen.

Justin King, who is the former boss of Sainsbury’s and is now advising the Czech group in its bidding, has said that the lottery needs to go through a revitalisation. He noted how a decline in the number of players since the original launch has been experienced and mentioned that more players need to be playing more often. He went on to say that “through greater sales we will be able to deliver more for the great causes”.

Yet despite the bids from other interested parties and the negativity raised by campaigners towards the lottery, Camelot has said that it is operating things properly. It spoke of there being 37 million adults playing the lottery in 2021 and proceeded to say that any suggestion of it raising money from a smaller figure of gamblers was actually “completely wrong”. It also highlighted that it is recognised internationally for its ability to encourage people to play lottery games but to only spend smaller amounts on doing so.

Products offered by Camelot have been labelled as being very different to those games available in the mainstream gambling market, according to the operator. The risks, therefore, are comparatively low, it said.

Yet it is the secrecy of the lottery operations that are of a major concern to campaigners. They have requested more public information be given on the number of people participating in the lottery each year. Not only that, but the amounts that have been lost by the highest-spending players each year is also requested to be made public.

Lord Foster, who serves as a member of the group and chairs the Peers for Gambling Reform, spoke of ministers needing to examine whether any new restrictions for betting firms should also be applied to the instant win lottery games as well. A white paper is expected some time soon, which will provide details on the vision for the future of the UK gambling scene. Foster spoke of repetitive play being a large problem when it comes to gambling addiction. Because players can effectively chase their losses in an instant, it works against them. And he noted that whether that is “on a fruit machine or online instant wins”, the possibility behind such activity is the same.

The decision on which company will gain the licence for the UK lottery from 2024 onwards will be made in the next couple of months. Yet the bid itself is being conducted behind closed doors, leaving the public out of the fray once again.