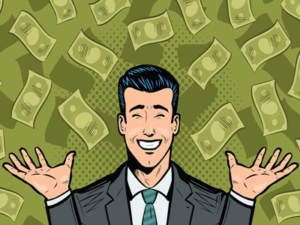 The United Kingdom has had a long enough history with The National Lottery by now, and over the years, a number of different games have been introduced for people to play. This includes the EuroMillions game, that incorporates players from across various European countries. Operating since 2004 and now including nine European nations, it has become quite the inviting lottery for people to participate in.

And as it happens, a British couple has become the largest ever winners of the EuroMillions lottery recently, scooping a massive £184 million on Tuesday, May 10. While originally keeping quiet about their massive win, the couple has since stepped forward to make themselves known as Gloucestershire pair Joe and Jess Thwaite. Their lottery win of £184,262,899 has made them richer than popular singing sensation Adele overnight. And they did it all by purchasing a Lucky Dip ticket.

Speaking of the massive win, Jess said that it will allow them “time to dream” – an understatement on such a monumental victory, if there ever was one. The couple, who also have two children with each other, outdid the previous record held in the United Kingdom for biggest winner, which was a £170 million win in October 2019, with the person acquiring that wishing to remain anonymous. The Thwaites were unveiled by Dermot O’Leary as the big winners at a glamour-filled event held on the morning of Thursday, May 19.

The win will also provide Joe and Jess the chance to share a lot more time and experiences “and go on adventures” with their family and friends.

The EuroMillions jackpot was paid out to the couple after the winning numbers of 3, 25, 27, 28 and 29, as well as the Lucky Star numbers of 4 and 9, were the exact same ones on their ticket. And those aren’t numbers that the pair chose themselves, instead opting to purchase a Lucky Dip for the draw.

Joe, who works as a Communications Sale Manager, married Jess, who operates her own hairdressing salon business with her sister, 11 years ago. During the reveal with Dermot, Jess said that they have had one week to “think about this” and now they know what they want to do with a portion of the funds. Of course, £184 million is not something that can just be divvied up and utilised in a split second, and there is plenty of time in the future for them to utilise it as they wish.

Their win marks the second EuroMillions jackpot payout obtained by someone based in the United Kingdom this year. The previous one occurred from the draw on February 4, when an anonymous player scooped £109 million. This was claimed a few days after the official draw took place.

What could the pair from Gloucestershire purchase with their £184 million win? Well, four of the islands in the Caribbean could be bought outright and there would even be a few million to spare afterwards. Alternatively, they could buy 11 six-bedroom properties in the luxurious Hyde Park area of London.

Or perhaps they would go ahead and do something similar to 2011 winner Colin Weir, who used his winnings of £161 million to purchase Partick Thistle football club. Following the transaction, which gave Weir a majority shareholding in the club, the winner said that he would gift the ownership to the team’s fans one year later.

Speaking of their victory, Andy Carter, who is the Senior Winners’ Advisor at The National Lottery operator Camelot, said,

“This is absolutely incredible news! Last night saw history made with the biggest ever National Lottery prize won by a single UK ticket-holder, and we’re ecstatic that we’ve now received a claim. Our focus now is on supporting the ticket-holder through the process and helping them start to enjoy their truly life-changing and record-breaking win”.

It may not be over for UK EuroMillions players, either. In 2021, five people banked massive jackpots from the lottery, including one who secured a £122.5 million jackpot in April of that year. Then, just two months later, someone else won £161 million.

The Thwaite’s Hold The Record

While the Thwaite’s now hold the record for the largest EuroMillions jackpot win by a British ticket-holder, there is every chance that the record could be broken in future. Joe spoke of being in disbelief when he received an email informing him that he had won such a vast prize. He thought it was simply a prize of another Lucky Dip ticket, which can happen as one of the lowest prizes from the lottery.

He initially believed that the win was in the thousands rather than the millions, before he “started counting the digits” and coming to the realisation that it was a life-changing sum.

Joe spoke of the fact that the pair have been looking to move house for quite some time already, using Right Move for their search. Previously, the houses they have wanted have been outside of their limitations of what was affordable. After the big win though, he thought,

“I don’t need to filter, I can actually just look at anything”.

He proceeded with waking his wife up on the morning after the draw, informing her that he had a “secret” to tell her. Upon informing her that they had won £184 million, her response was, “Don’t be stupid”, as would potentially be quite common for anyone. Jess proceeded to say that she believed it was all a game and that it would be fun to play along with it, thinking they’ve won the lottery “because it’s not real”.

It was only when they called the lottery office at 8am – when it opens up for operations – and were informed that they had definitely won the EuroMillions jackpot that it hit. And even then, Jess said that she didn’t believe it was real, and still doesn’t.

Joe has already handed his notice in at his communications job, while Jess has taken some time away from the salon as they need to “take some time with that” to decide what they are going to do regarding working. “I think we’re going to have a full-time job managing all of this for quite some time”, she commented.